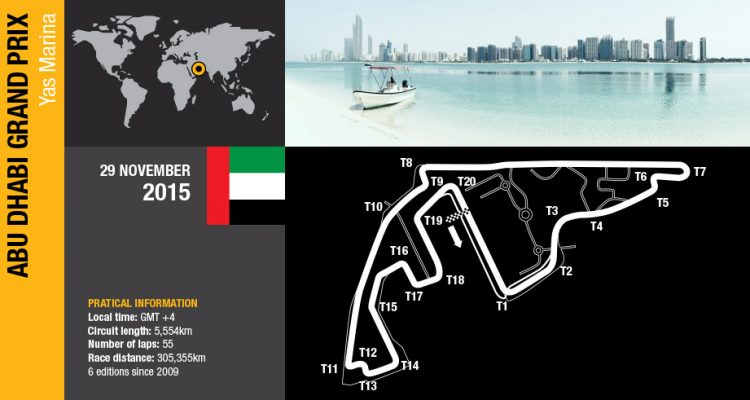 After a long season we reach the final race of the year in Abu Dhabi. By our own standards it’s not been as successful as we could have hoped and it will hurt if we finish the year without a win. But we have learnt a lot and there are also some strong steps forward that will consolidate us in future. After a shaky start to the year we have consolidated reliability and each part is much more robust than in the last year. Performance wise we are also closer to the competition and know that in some circumstances we are able to challenge for the podium. Naturally challenging for wins is the next step in our recovery and the information learnt this year will help us get closer to achieving this aim.

The Renault Energy Power Unit has covered almost 50,000km over the 2015 season over the two teams. That’s almost 10 flights from Paris to New York. A power supply unit used by Carlos Sainz has racked up the most individual kilometres, with 7,418 km completed.

In qualifying alone this season, one driver will have used the equivalent of the energy stored in more than 270 champagne bottles.

More technically speaking, the energy recovered through the MGU-K by all 20 drivers on the grid during the 18 qualifying sessions held so far this year is equivalent to around 10GJ or 2900kWh. This is roughly equal to the energy used by four people throughout a whole year, or around 62% of the energy used by a UK household.

Top speed this year is the highest seen since the V10 era. In Mexico, speeds peaked at over 360kph due to the low air density. That the 1.6 litre V6 hybrid engines can reach similar speeds as 10 cylinder 3.0 litre engines is incredibly impressive considering the lower cubic capacity and energy efficiency of the turbocharged power units.

Even more fuel was saved in 2015 than in 2014 using lift-offs at the end of straights. Compared to 2013, more than 6,600kg of fuel has been saved over the two seasons. That’s the equivalent of 66 race distances in the current engine formula.

The Yas Marina circuit in Abu Dhabi has provided some championship showdowns, and some classic races. One of the most enjoyable came in 2012 when Kimi Raikkonen took an unexpected win for Lotus F1 Team. Lotus had had several podiums over the year, but strong competition from Red Bull, Ferrari and McLaren meant that a win had so far eluded them. Kimi Raikkonen’s engine engineer, Ricardo Penteado, recalls when the team finally secured that victory:

‘Lewis Hamilton had taken pole, but we’d also had a strong qualifying, with Kimi taking fourth on the grid. Lewis held the line through the first corner and converted his pole but Kimi got a flying start and moved into second. I can remember thinking that this would be a great result if it carried on like this, but until lap 20 it was all fairly routine. Kimi challenged Lewis for the lead a couple of times, but there wasn’t anything that stuck.

‘But on lap 20 it all changed as Lewis stopped with a technical problem. Kimi was in the lead! At this point everything in the garage became a lot more pressured as we could be in for the win rather than just a podium. I can’t recall very much about the mid-point of the race as we were just concentrating and keeping going, but in the final stages Fernando Alonso was getting closer and closer. An already tense garage got even more tense. You could hear it in the radio communications in the garage and particularly to Kimi himself…his engineer kept giving him instructions – probably more for his own reassurance – but Kimi just shrugged it all off and told him to leave him alone, he knew what he was doing! It was a moment of comedy in the middle of the stress, and we all laughed. There were always things like that with Kimi, it was never dull on the radio!

‘For us on the engine side we also knew that it was going to be tight. Kimi was pushing so much that we were looking marginal to finish the race and have enough for the fuel sample afterwards. Certainly without the four safety car laps between laps 39 and 42 we would have certainly needed to stop the car just after the checkered flag.

‘It was really cool after the race. You could see how much it meant to everyone. It had been an amazing race in all aspects, but certainly not easy. Everyone felt like we had really earned it.’

Yas Marina is a mid-range power track, but it is particularly hard on the ICE due to the long 1.2km back straight where the power unit will be at full throttle for 14secs. The sharp acceleration between turns also loads and unloads the ICE in quick succession, stressing the pistons and other internals.

Over 50% of the lap is spent at full throttle, with average speeds of 190kph, similar to the Circuit de Gilles-Villeneuve. Top speed will peak at over 330kph down the back straight between Turns 7 and 8. This may seem slow in comparison to the highs of Mexico and Brazil, but it’s just as impressive as the cars will be running medium to high downforce settings and the sea-level air is much denser than at high altitude.

The ambient conditions are also a major challenge for the ICE. The heat and lack of humidity can cause the very destructive ‘knocking’ phenomenon that can occur in turbocharged engines if the ignition timing is not correct. Knocking, or detonation, is abnormal combustion of the fuel and air mix.

The unusual timetable of Abu Dhabi, where some sessions take place in the heat of the afternoon and others after sunset make engine mapping a tricky process. Sometimes engineers may run two different engine maps since the grip levels, tyre warm up and air pressure will change and the engine also needs to respond to this new set of parameters. The engineers will work closely with the driver to obtain a pedal map tailored to the different track conditions throughout the day.

After the dizzy heights of Brazil and Mexico, the turbocharger is given an easier time in Abu Dhabi. It rotates within the normal operating limits with very few periods of stress. The tight corners of Sector 3 require it to be responsive out of the corners, but apart from this part of the track, the Grand Prix is very routine for the turbo.

Fuel consumption per km is the fifth highest of the season behind Melbourne, Montreal, Zeltweg and Sochi. The first two sectors are relatively fuel efficient but the stops and starts of the final sector dramatically increase the consumption. It is increased further by the sea level altitude and running in the lower temperatures after sunset.

Energy recovery is critical due to the fuel consumption constraints but with 21 corners, most of which are second or third gear, there is plenty of opportunity for the MGU-K to recover energy dissipated in the braking events.

The corners of Sector 3 are mainly taken in third gear. The average speed through this section is just under 160kph with the biggest stop being the chicane of Turn 12, where speeds drop to just 85kph.

Abu Dhabi is a typical modern track with very few fast corners so the MGU-H is not heavily solicited. The quickest complex is between turns 2 and 5 where speeds will be between 240 and 290kph. The car and driver will be subject to high lateral forces through this flowing section, pulling between +/-5g whilst changing direction, but the full throttle usage will maintain a steady stream of exhaust. 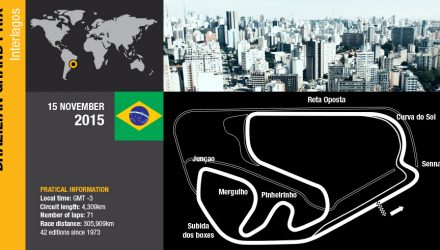 Rémi Taffin, Director of Operations Last year, we were a little nervous going to Interlagos on account of the altitude and the effects on the turbocharged power

RÉMI TAFFIN, DIRECTOR OF OPERATIONS Suzuka is one of