HRT has come long way since last week in Melbourne, and today both cars were inside the 107% Time of 1:43.974 and it seem that a working DRS made the difference they hoped for. 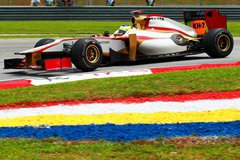 A good day’s work by HRT Formula 1 Team today at the Sepang International Circuit where the young Spanish team accomplished the objective of qualifying for the second race of the season, leaving behind a large amount of the problems that prevented the team from taking part at the inaugural race last week.
The team worked until late last night to fix the issues with grip and heating of the cars and both Narain Karthikeyan and Pedro de la Rosa were satisfied after the morning’s practice session which left, not only better times, but good sensations in the team. The team rose to the occasion in qualifying and both drivers were able to make the most of their tyres, setting times that ensured their participation in tomorrow’s race. De la Rosa and Karthikeyan will start from 22nd and 23rd respectively for the 56-lap race, which will surely test the drivers and the car in one of the most demanding races of the season.

Pedro de la Rosa: “It was a good day. From the first lap in the morning I felt that the car had improved notably and we improved our times significantly. We’ve lowered our time by more than a second from yesterday to today and every time we modify something new we’re going quicker. We could have improved our times even more during the qualifying session. I was only able to do one lap but it was enough. The important thing was to qualify and we did. The team has proved that in a short amount of days it managed to have the DRS ready and improve the power steering and other aspects of the car. We’ve taken a huge stride and I’m very satisfied because of that. Now we have to see how tomorrow goes in long distance because it will be the first time we string so many laps together, which won’t be easy in this weather”. 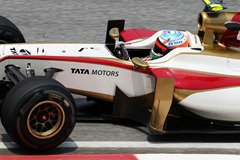 Narain Karthikeyan: “The conditions changed a lot from the morning and the track was much more slippery but we qualified for the race which was our first objective for this weekend and a positive step from Australia. We had to change our strategy a little bit today because of some heating issues, and it worked, but now we must focus on overcoming those issues and aim to finish the race. It would be good for us if it rained because that keeps the car a bit cooler but, no matter what, we’ll have to give it our best and try to put in a good performance”.

Luis Pérez-Sala, Team Principal: “I’m satisfied with how today went. It could have gone even better but we’ve accomplished our first target which was to improve the car and qualify for the race. In Australia, after all the work we put in, it was tough to fall just short. But we’ve continued to give it our all and, in a few days, we’ve taken another important step forwards. We still have many to take and tomorrow we will have another opportunity, but the important thing is to be closer to the rest in terms of times and that the team is gelling more and more. That way we will identify our weak points and fix them quicker, as we have done here. I’m very proud of the work done by every member of the team”.