European GP 2012 Race – Ferrari: “This is Ferrari at its very best”

After the Formula 1 Race on Sunday Fernando Alonso, became the first driver to take two wins in this topsy-turvy season.

If you like the numbers here are some interesting figures for you: the Scuderia Ferrari man thus recorded his 29th win from 186 race starts in his career, the eighth from 46 races at the wheel of a “Prancing Horse”.

It’s Fernando Alonso’s third European Grand Prix victory, the seventh for the team, coming on top of its win here in 2008 with Felipe Massa. For the Spaniard it’s his second win on home soil, after his victory in Barcelona in 2006. This is win 218 from 839 Grands Prix starts for the Ferrari Team.

Ferrari President Luca di Montezemolo:  “This is Ferrari at its very best, the one everyone wants to see! Fernando was extraordinary and it’s hard to find the words to describe his race. I am very sorry for Felipe, who was really unlucky: he was going very well and I’m sure he could have brought home a good result if not for all the problems he had. Today has shown the spirit of a team that never gives up and it also reflects the spirit of our homeland in Emilia Romagna, where so many people are going through a particularly difficult time after the earthquake a few weeks back: let’s hope this victory will at least have put a smile on their faces!”

Stefano Domenicali: “We are very pleased with this victory, but we won’t let it go to our heads. Yesterday, we had said that the result of qualifying did not reflect our potential and I think today’s performance proves we were right. A shame for Felipe, who really got hit with one misfortune after another, first with debris ruining the balance of his car, then with the fact the Safety Car period came immediately after he had pitted and finally, the collision with Kobayashi: he had started in fine style and had everything in hand to get a really good result. Fernando was spectacular, in terms of showing aggression and in the way he managed the car and tyres. We could tell that this weekend felt very special to him and the win was really emotional for him and the whole team. Today, some of our competitors had reliability problems and that serves as a reminder that this aspect is crucial for success: in such a closely matched season, a no-score carries a high price in the classification. We said it at the beginning: these twenty five points will definitely not go to our heads. We are well aware how things can change in the blink of an eye and we must continue to work on improving the car’s performance, because it is still not at the level we want.”

Fernando Alonso: “This has been an unforgettable day for me and I can’t find the right words to express my feelings! Winning in my country is an indescribable emotion: I still remember the victory in Barcelona in 2006 and winning today in Valencia with this fantastic team, is amazing, especially when we are going through such a difficult time at the moment in Spain. It’s nice that sport and I’m thinking of the wins for the national football team and Nadal, might be able to give people something to smile about. Stopping on the slowing down lap? I don’t know what happened but it came at the right moment, because I was in front of the grandstands and I was able to celebrate with my fans! Sport always delivers the same lessons in that there are highs and lows and things change quickly. Yesterday we didn’t make it to Q3 and today we have won: it means that we should never give up, right to the chequered flag. 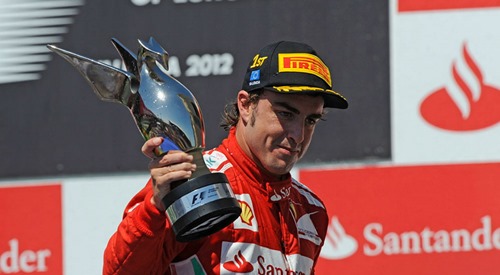 It’s a nice present for everyone who has come from far away, maybe even sleeping in their cars and then staying in the grandstands in this torrid heat. At the start, it was not easy to make up places and I tried to delay the braking to the maximum at Turn 4, staying on the outside. Then I started to fight my way up and, after the Safety Car, I began to think a podium could be possible. Then I attacked Grosjean and managed to pass him, although I was worried that I might have sustained some damage when we touched. After two or three corners I realised everything was alright and I relaxed. When I went into the lead after Vettel retired, we were all hoping the tyres would last to the end. I was always talking to my engineer who told me I was running the same pace as those following me: in the end, there was not much left, but unlike Canada, the others were in the same situation.

It was emotional being on the podium with Andrea Stella, because he has also worked with Michael and Kimi: he could celebrate in the best way possible a totally unexpected win, given our grid position. Thinking back to yesterday, what happened confirms there is still a lot of work to be done and we have to be honest about this, to ourselves and to our fans. We will do all we can to win this championship, but we still don’t have the quickest car and we must push to reach this objective as quickly as possible.” 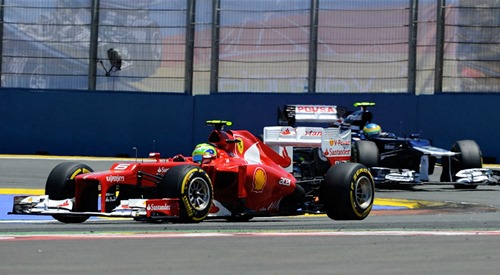 Felipe Massa: “What do you want me to say, nothing went right today! From lap 8 onwards I started to feel there was something not right at the back of the car and, at the end of the race, the team found some damage that had completely ruined the balance and the aerodynamic downforce level. From being able to attack the Force India, I went to losing a second a lap! I am very disappointed, because I had a good pace and could keep up with the group Fernando was in. Then there was also the collision with Kobayashi and there, any hope I had of finishing in the points evaporated. The car was going very well today and it was at the level of the best, I am pleased for Fernando, who drove a fantastic race to win, but there’s also some bitterness as today could have been very nice for both of us”