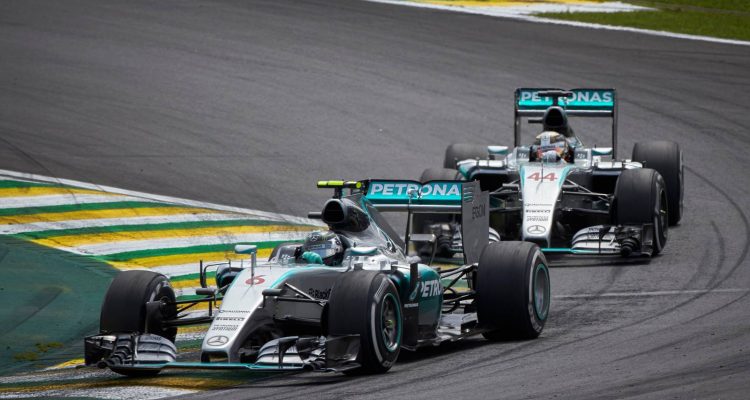 Mercedes will continue to decide on strategy – Wolff

In Brazil, teammate Nico Rosberg won his second consecutive race from pole, as the German declared he is back in top form after losing the drivers’ title to Hamilton.

“Lewis put in a good challenge but I was able to control it and never give him a chance,” he said.

However, Briton Hamilton argues that the reason he didn’t have a chance is because it is impossible to overtake at Interlagos, even though rookie sensation Max Verstappen was hailed for his feisty passing moves.

“I had the pace,” Hamilton insists, “it’s just you can’t overtake around here.”

He was heard on the radio pleading with Mercedes to put him on a different strategy to Rosberg, who with his victory on Sunday cemented second place in the drivers’ world championship ahead of Sebastian Vettel.

“I was like ‘If there are any other strategies, let’s do it, let’s take a risk, let’s do whatever’ and they (Mercedes) are like ‘Look after the tyres’ and I’m like “no, I’m racing’.

“I think that’s what people want to see,” Hamilton added, “but it was relatively boring following in a tow.”

Team boss Toto Wolff, however, insists that it will be Mercedes who continues to call the shots when it comes to strategy.

“We have our strategists,” he said, “and if the drivers in the car start to make their own (decisions) they would lose every single race.”

Rosberg also backs Mercedes’ policy of enforcing the strategies, arguing that allowing Hamilton to dictate the decisions would not be fair.

“In advance you can only go by what the computer tells you,” he said. “It wouldn’t really be fair for the guy who is running second to go for the other strategy and then for it to turn out that it was massively quicker.

“It should be just me against Lewis and that’s it and no luck involved,” said Rosberg.