For Bruno’s the race ended early as he was forced to stop on track with damage sustained following an incident with the seven time world champion Michael Schumacher. The two drivers of course dispute whose fault it was.

Mark Gillan, Chief Operations Engineer:  What can I say – a massive result for the team and a stunning drive by Pastor. The whole race went well from start to finish with every team member playing a vital part in this victory. We will allow ourselves a bit of time to savour the win and then will refocus to concentrate our efforts on continuing to improve throughout the remainder of the season. Obviously it was disappointing that Bruno got taken out of the race by Michael but Bruno is looking forward to getting back into the car in Monaco. 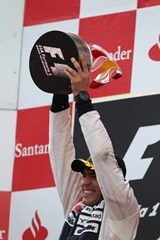 Pastor Maldonado: It’s an unbelievable feeling winning my first race. The car felt really consistent, was fantastic to drive and our pace was strong throughout. Alonso was chasing me hard but we looked after our tyres well and I managed to open the gap towards the end. The team has worked so hard all year and this win is for them. To be the first Venezuelan to win a Formula One race is a big honour and hopefully I will win more races in the future.

Bruno Senna: It has been a disappointing weekend for me on the whole. It was difficult to overtake at the beginning of the race and then Schumacher got a big DRS boost coming down the straight and went into the back of me. These weekends with lots of bad luck happen sometimes, but on the up side our car has shown excellent pace with Pastor’s win. I am really happy for him and this will give the team a big boost headed into the next race.

Laurent Debout, Renault Sport F1 team support leader:  There is nothing else to say but a huge congratulations to Pastor and the entire Williams team. Pastor drove a fantastic race to score his first win in F1, fully deserved. We are really proud to have contributed to helping the team score its first win since 2004 and the first Williams-Renault win since the 1997 season. What a feeling to deliver on the speed and performance we have shown since the start of the year.