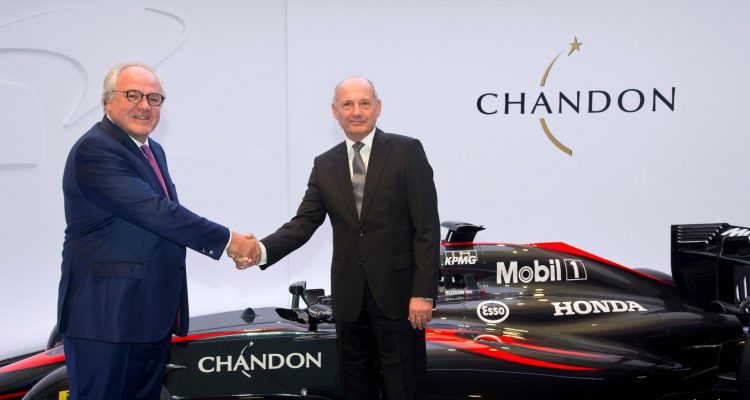 As one of the most successful teams in Formula 1 history McLaren meets Chandon, the vibrant sparkling wine with a boundless conquering spirit. The partnership perfectly highlights Chandon’s open spirit, ‘joie de vivre’ and spontaneous approach to life.

The partnership is a long-term, global collaboration that will bring Chandon’s sparkling attitude to the famous McLaren Honda Formula 1 Team.

Formula 1 racing is a thrilling international spectacle, and the McLaren Honda Formula 1 Team’s passion and legendary champions have long been at the heart of it all.

McLaren and Honda returned to the racetrack as partners at the start of the 2015 Formula 1 season. The partnership reunites one of the most dominant pairings in motorsport history: between 1988 and ’92 McLaren and Honda won eight world championships and 44 grands prix, took 53 pole positions and set 30 fastest laps – all in just 80 grands prix.

“The McLaren Honda Formula 1 Team’s story is characterised by human endeavour, filled with heroic champions who have stood on sport’s global stage. This is a team that seizes the moment and remains open to new challenges,” said Christophe Navarre. “Chandon couldn’t be happier to partner with the McLaren Honda Formula 1 Team. This is a rich new occasion to bring our fans together around the world, and to enjoy the depth of this connection.”

Ron Dennis said: “It is extremely exciting that Moët Hennessy has chosen to join with the McLaren Honda team through Chandon to form a unique, long-term partnership. The fit between Chandon and McLaren Honda is a natural one with both sharing a passion to innovate in whatever we do, combined with a unique style and approach. It is a great privilege for everyone at McLaren Honda to partner with Chandon, one of the iconic brands in the prestigious Moët Hennessy portfolio.”

Chandon was founded on this spirit of openness and collaboration: the kind that invites outstanding, fruitful encounters. Renowned oenologist Renaud Poirier set out to explore the world and find the best terroirs to create sparkling wines. He first arrived in Mendoza, Argentina in 1959 and collaborated with local winemakers, adapting traditional French winemaking know-how to local varieties. The result, thanks to this versatile openness and laid-back approach to doing things differently, was an exceptional new breed of local sparkling wines.