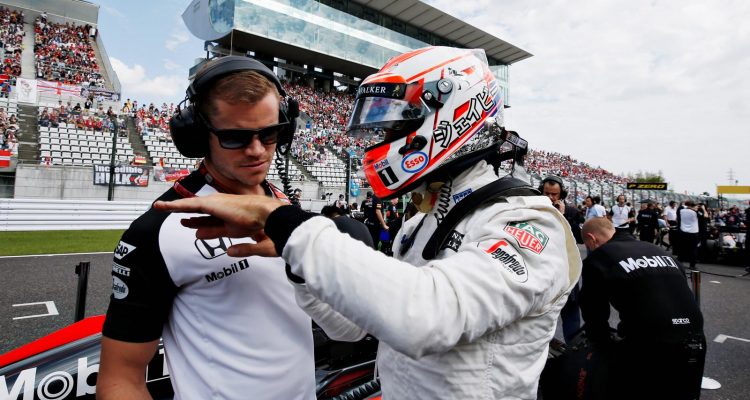 McLaren has rubbished the theory that Jenson Button is weighing up a move to Renault next year to replace the Haas-departed Romain Grosjean.

“This article is nonsense,” a spokesman for the struggling Honda-powered team told us, after the speculation of a switch to Enstone for Button did the rounds. Clearly, however, the threads of the story are all present.

Button and Ron Dennis are openly disputing whether a deal for 2016 is in place, Button says he only wants to be in F1 if he is “competitive”, and managing director Jonathan Neale said in Japan that McLaren would “respect” Button’s desire to go. But Speed Week quoted Button as saying: “After so many years together, it would feel wrong to go somewhere else. “If I am in formula one in 2016, it will be with McLaren-Honda,” he insisted.

The Button saga aside, another sign that McLaren-Honda is in turmoil is fresh speculation in the Spanish press that Fernando Alonso could decide to take a “sabbatical” in 2016 rather than spend another season at the back.

Former two-time champion Mika Hakkinen, referring to Alonso’s radio outbursts at Suzuka, told Finland’s Ilta Sanomat newspaper: “When development of the engine is very slow, it is a frustrating time for the driver. “I remember it from my own career, when Mercedes came to McLaren,” he said. “But especially with these rules you cannot assume that engine manufacturers can take big steps at every race.”

Hakkinen continued: “Alonso and many other drivers are compensated really well for what they do, when they agree to support the team in good and bad times. “Myself, I waited seven years for my first victory. Yes, Alonso is a double world champion, but he has only driven the McLaren-Honda for about half a year — yet already he has begun to complain about the engine manufacturer. “Fernando should keep in mind that he signed up for this challenge,” Hakkinen concluded.

F1 legend Niki Lauda hopes McLaren-Honda can remain united amid the challenge. “I just hope they don’t make the same mistakes that Red Bull and Renault made,” the Mercedes team chairman told Swiss newspaper Blick. “Sure, McLaren expected more from Honda in the first year, and perhaps vice versa. But it also needs time, just as with Mercedes in the early years of Schumacher and Rosberg,” Lauda insisted. “There are no guarantees of success in formula one,” he said.

F1’s next winner could be at the wheel of