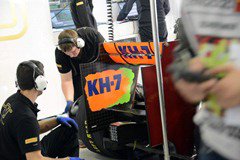 The set-up adjustments which were made to the car yesterday didn’t give the best result this morning on the track but, as the weather was more stable, the team was able to work on the set-up of the cars for the definitive qualifying session in the afternoon. Once they took to the track, the drivers felt a substantial improvement in the balance of the car which allowed them to make the most of both sets of soft tyres. De la Rosa and Karthikeyan finished 23rd and 24th respectively and face tomorrow’s 56-lap race with the objective of taking both F112’s past the finish line once again and continuing to gather vital data for the development of the car. 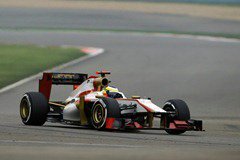 Pedro de la Rosa: "I think it was, by far, our best qualifying session to date. I’ve already said many times that we’ve got a lot of room for improvement, but the important thing is that we’ve cut down the distance with regards to pole position considerably, some four seconds from first, and that’s very positive for us. We’re bringing the difference down and, although we’re not going to stop here, we’ve taken a step forward, so I’m very happy. In this qualifying session we’ve made various changes to the set-up and the car responded well and, even though this morning there was no way of making the car turn well, in the afternoon, once I got in I felt the car was better. Tomorrow we hope to fight, as we did in Malaysia and if we can finish a little bit higher, then even better”. 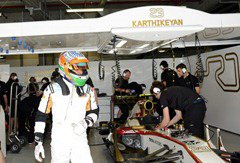 Narain Karthikeyan: "In the morning we had some trouble with the suspension but we got it fixed in time for the afternoon. In qualifying I got blocked on my first lap and didn’t clock a good time on the first set of tyres. On the second set I made a flatspot, so that’s the reason I didn’t do so well, but nevertheless we’re comfortably inside the 107% and that’s important. Tomorrow if it rains during the race that will benefit us, if not we’ll have to try and do the best we can. The target once again is to achieve mileage and I’m confident that the car should be able to make it through the whole distance”.

Toni Cuquerella, Technical Director: "We’re satisfied with today’s result and, in general, with the work the team and drivers put in which, added to the upgrades we’ve brought to this Grand Prix, have enabled us to qualify comfortably inside the 107%. In fact, the better of the two cars is at a 104.4%. We’re functioning as a team, with normality and without major problems and that in itself is satisfying and proves that we’re starting to be at the level which we should have been at the start of the season. From here we have to continue improving as our rivals aren’t far away. Tomorrow’s objective is to finish with both cars and for the performance shown in qualifying to translate into the race also”.