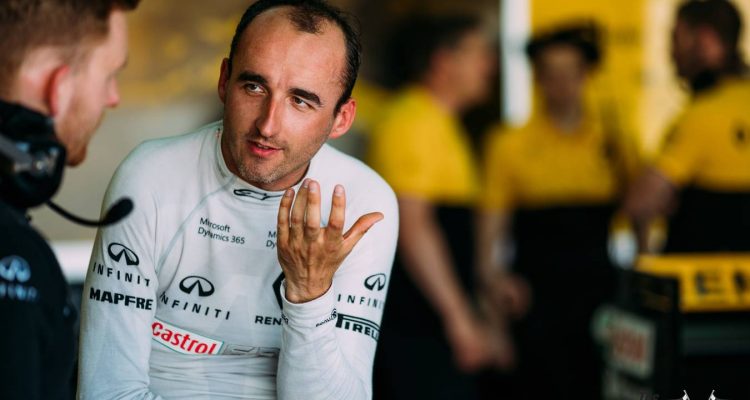 Robert Kubica has not denied speculation he is now in the running for the Williams race seat for 2018.

Earlier, the former BMW and Renault driver was eyeing a return to F1 next year with Renault, following a spate of tests.

And so Kubica, and his management including retired world champion Nico Rosberg, have shifted their sights to Williams.

The British team looks set to oust the re-retiring Felipe Massa, and is apparently considering Kubica, Paul di Resta or Jolyon Palmer as his potential replacement.

When asked about the Williams reports, Kubica said: “Thanks to the tests with Renault I was able to find out that I can drive a formula one car.

“Now we are working on a solution for the future. Whether it will be in formula one or somewhere else I don’t know yet. But I am trying to find a solution that will allow me to continue what started with my first test in June,” he told Poland’s Przeglad Sportowy.

“In recent years I have had to be patient, and I have approached this whole situation rationally and not emotionally.

“Hopefully everything will work out as I hope and in the near future I will have some positive information,” Kubica added.

According to some Polish media reports, Kubica’s Williams chances – and potential forthcoming track test – are being funded by a personal sponsor.

“I must say that this is not true,” he insisted. “My future does not depend on what my sponsors or partners will do.”

As for the rumours he struggled physically on the ‘long runs’ with Renault, Kubica said: “I’m glad there are rumours, because they are about me being in the car compared to the six years when I was not!

“Thankfully those who make the decisions to do not pay attention to rumours and speculation,” Kubica added.

Australian GP will start in: