Ferrari of 2012 a surprise ? Video Included

This Wednesday we were able to see for the time some real images of the first car that was officially presented for the  2012 Formula1 Season, the Caterham CT01. And the car from the guys of Tony Fernandes has a feature that, in principle, we would see  on the cars of other teams on the grid as well: the nose in the shape of a duck beak.
At first glance it is shocking, but the new regulation approved by the FIA Technical bind all the teams to lower the height of the nose of all cars. Although this is only the beginning, because the big teams on the grid and here we aim especially Ferrari and McLaren appears to have taken a very radical way in the design of their cars.
During this season we have heard statements from the two teams that leave no doubt about that. "I see the Ferrari 2012 and I am amazed," said Stefano Domenicali Ferrari’s team principal, at Wrooom in Madonna di Campiglio. "It would be nice," said Luca di Montezemolo. While Jonathan Neale from McLaren, said: "We’ll risk it."
After hundreds of rumors and sketches in recent weeks has been published in the Italian press, La Gazzetta dello Sport and mainly Autosprint (the picture from the head of the article), several sketches of what could be the car that the  Maranello team will present on February 3rd. Giorgio Piola specialized illustrator has made several drawings of how, according to their information, will look the new Ferrari, known as ‘Project 663’. Let’s take a look at what has been published so far and if is true or not will only know on next Friday. 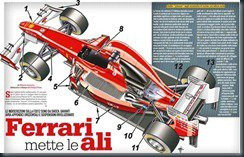 First of all I must say that the information on the new Ferrari car has been "evolving" and what was said in the beginning has been changed with the passage of time. The first drafts of Piola, recreated in the video on these lines, centered on the nose and rear of the car. The front of the Ferrari will be lowered, producing a step-up to the nose of the car (as seen in the Caterham CT01) and rear exhaust will be “funnel-shaped”, as this is another requirement of the new regulations.
So no surprise here, but recently the technical specialist in Formula 1 Craig Scarborough has posted on his blog that the big teams could continue to use exhaust gases on the  rear to continue to benefit from aerodynamic point of view although these will have to comply with the “funnel-shaped” regulation. According to Scarborough, the engine exhaust could be directed toward an conduct placed on the inside of the rear wheels to cause more down-force directly to the tires. This solution would still be within the rules, even is going to be on a grey area sort of speak.
And last but not least are the suspensions ‘pull-rod’, this type of suspension seems to be one of the key points on that Ferrari invested a lot of  work. If this information is correct than it seems that the Italian team could have built the new car with the ‘pull-rod’ suspensions and has managed to incorporate them after 11 of not using this system. It is worth mentioning that Red Bull has been using this type of suspension since 2009 and we all saw how good results they had and how much help that system provided for lowering the center of gravity of the car.
In principle, the ‘pull-rod’ system would be used only for the rear suspension, but there are some media reports suggesting that the Red car also incorporated the system on the front, as it was on Fernando Alonso’s Minardi in back in 2001, for example. Although the front suspension approach generates many questions as it seems very difficult to implement such a system with the new low and narrow nose as we will have this year.

Here is a video that is presenting how the new Ferrari “Project 663” might look compared with Italia F150: