Seat fittings for Fernando and Fellipe 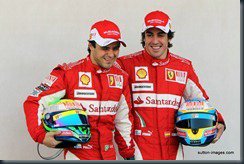 Yesterday, 24th January in Maranello, Felipe Massa and Fernando Alonso made actual contact for the first time with the car they will drive in the 2012 World Championship. The two Scuderia Ferrari drivers were in Maranello to try out their seating position in the very first car to be assembled over the past few days at the Gestione Sportiva.
It also provided the opportunity for the drivers to meet up with Stefano Domenicali and the engineers and to be brought up to speed with development of the car. Felipe and Fernando, along with Jules Bianchi and Davide Rigon, will spend the next few days at a training camp in the Canary Isles taking part in a programme aimed at putting the finishing touches to their physical training, prior to the start of the season. Their next public outing will be on 3 February at the Fiorano track, for the presentation of the new car to the media and the Scuderia’s partners.