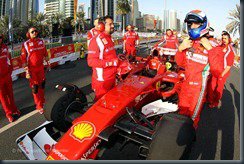 It was yesterday 21 January 2012 when the Ferrari driver Marc Gene took a Formula1 Ferrari car used in 2008 season to the Doha corniche. This event it’s organized by Shell in collaboration with Qatar Motor Show and it’s a thrilling spectacle as a Formula1 Ferrari is storming the Qatar’s capital streets at over 300km/h on a 3 km long temporary set-up venue.

Marc said after the show: “It was a very interesting day: demonstrating a Formula 1 car in such a beautiful setting was really enjoyable for me.”  “I’ve done quite a few events of this type, but I have never managed to go as quickly as I did today. Towards the end, I was pressing on the accelerator, because I could feel the enthusiasm of the crowd: it was down to the track and, in the shape of the F2008, an amazing car.” 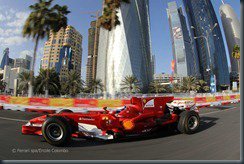 The Spaniard felt that is important to have events like this in order to increasing the popularity of Formula 1. “It’s great to bring our sport so close to the people, especially in a country that has never seen any F1 action and I am particularly grateful to the organizer’s of the event, for ensuring all the necessary safety precautions were in place as well as allowing the spectators to experience the spectacle in such an intense way. I like Qatar: I was here back in 2004 for the first running of the MotoGP and I have found the country has changed, grown in what one could say is a controlled manner. We got a very warm welcome, showing the passion the people have for Ferrari and motoring in general.”

With only a few weeks to go to the start of the season, inevitably Marc was asked about the Scuderia’s prospects for 2012. “Back in Maranello, everyone is doing their utmost to be as well prepared as possible for the season,” said Marc. “We are pleased with the work we are doing, but we are well aware that we don’t race alone and the others are also doing their best. We will only begin to get a true picture at the first Grand Prix in Melbourne. Clearly, Ferrari has just one objective, which is part of our DNA, namely victory and we have proved many times before that we know how to achieve it: it’s not by chance that we are the most successful team in this sport. However, we are equally aware that winning is never easy, especially in a sport as competitive as Formula 1.”