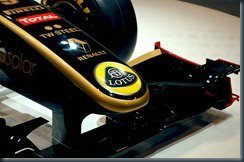 Now it’s been clear that in the past years FIA became an very indecisive organization, and 2012 starts with them doing the same, in this case is about Lotus-Renault Reactive Suspension System, which is an innovation taht was developed to help the cars stability while braking.

After the initial talks about the system it appeared that all is OK and the system is legal therefore alongside Lotus, Ferrari and Mercedes started working on a similar system, but yesterday FIA decided that the system does not comply with moveable aerodynamic devices rules and therefore will not be permitted for the Formula1 2012 season.

Mark Gillan, Williams F1 C.E.O. confirmed the news yesterday: “The FIA has just banned that particular type of system,” he also added: “We have been investigating that type of system for a while. It obviously has an impact on the aero platform of the car. Anything that gets the front ride height lower is beneficial from an aerodynamic perspective.”