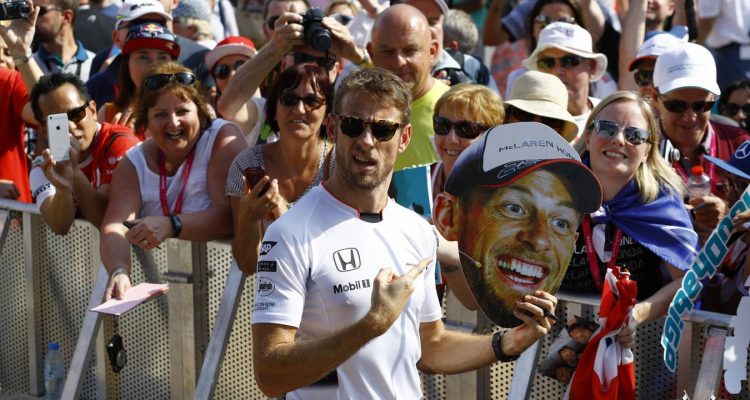 Jenson Button bows out of Formula 1

While Nico Rosberg stole the headlines as he won the Drivers’ Championship ahead of Mercedes team-mate Louis Hamilton in Abu Dhabi, Jenson Button signed out of the sport after seventeen years behind the wheel.

The manner in which his race ended on lap thirteen summed up a season in which mechanical failures have blighted Button at every possible turn, but despite an apparent suspension failure, it did not dampen a weekend in which he received a guard of honour from his family, friends and team members who paid tribute to a driver who has enjoyed a rollercoaster ride over the years in Formula 1.

Although the Frome-born driver is only taking a sabbatical in 2017 and does have the option of returning to McLaren if required in 2018, the manner in which he treat the curtain closer in the United Arab Emirates would suggest that Button will not be returning. Formula 1 will lose a smooth and intelligent driver who was highly respected by his fellow peers, and although his name will be absent from any F1 tips posted on Coral’s website next season, Button walks away with many fond memories of what he achieved on the track.

Some may argue that Button could, and perhaps should, have achieved more during his seventeen years as a Formula 1 driver, given the promise that he showed in his early years. He joined Williams F1 in 2000 amidst considerable hype after enjoying success in karting, the Formula Ford Championship and Formula 3, becoming the youngest British driver to compete in the sport in the process.

Despite an impressive debut season, Williams’ pursuit of Juan Pablo Montoya saw Button move to Benetton on a two-year loan where he endured contrasting fortunes. A difficult first season in a non-competitive car was followed by much improved performances the following year, but his move to BAR in 2003 proved to be the making of Button in Formula 1.

He began to justify the hype by producing a number of assured drives, despite being the victim of mechanical failures on several occasions; Button needed a car to match his driving ability in order to have a shot at winning the Drivers’ Championship. Honda Racing F1’s decision to gain complete control certainly put Button on track to contend, but the launch of Brawn GP under former team principle Ross Brawn proved decisive.

Button thrived during the first half of the 2009 season in a car that came with an innovative, yet controversial, diffuser design which blew the grid away, and even though his dominance faded after major contenders introduced their own diffusers, the Brit managed to hold onto the sizeable lead he had established to become world champion.

A move to McLaren followed for Button, but despite finishing second behind Vettel in 2011, it has not exactly worked out as the team have been unable to reproduce a reliable and competitive car that made them one of the best constructors in Formula 1. However, an average of a podium every six races (50 in 305 starts) illustrates just how good a driver Button has been over the years, with the last of his fifteen race victories coming in the Brazilian Grand Prix in 2012.

His name may not feature on motor racing predictions made on Coral next season, with Button reportedly set to enjoy time with his family, along with rallycross and triathlons as it seems unlikely that he will exercise his option to rejoin McLaren in 2018. However, there is no question that one of sport’s true gentlemen will be missed from the grid, with fans likely to remember his coming of age as a champion and his ‘race of the century’ to win the 2011 Canadian Grand Prix as hallmarks of what Button achieved in Formula 1.