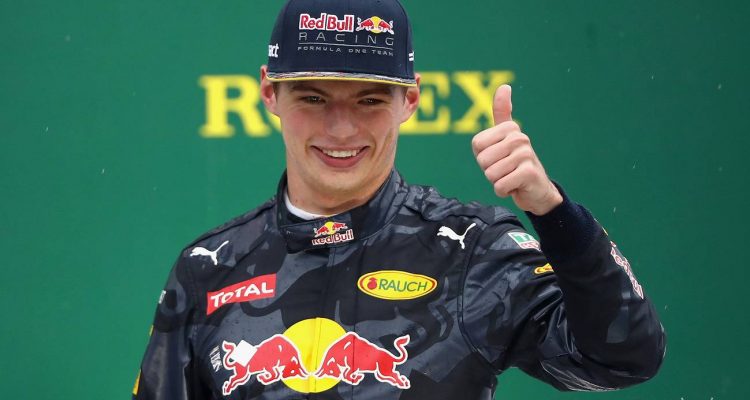 Verstappen Proves He Will Be a Challenger to Mercedes’ Dominance

Max Verstappen enhanced his already impressive credentials in Formula One with a superb drive in torrid conditions at the Brazilian Grand Prix to finish on the podium.

The Dutchman surged through the field towards the end of the race to finish behind Lewis Hamilton and Nico Rosberg in third place, although it could have been even better for the 19-year-old if not for a late pit stop.

Verstappen has been outstanding since his move to Red Bull after he replaced Daniil Kvyat five races into the campaign, being promoted at Toro Rosso. He made history in his first race by becoming the youngest winner of a Grand Prix and even to place on the podium at the age of 18 years and 228 days.

He has been a consistent presence on the podium throughout the second half of the season, and his performance at Interlagos is just the latest reminder that the Dutchman is destined for future glory, although he still has a way to go before he challenges Hamilton and Rosberg at the top of the Drivers’ Championship. The Mercedes duo will be battling it out for the crown in Abu Dhabi, but Verstappen may fancy his chances of sneaking his second career win, and you can visit sportsbooks to get his odds of another triumph to end the campaign on a high note.

The 19-year-old proved that he was destined for greatness in his first season with Toro Rosso, notching 10 top-10 finishes, even with a lacklustre vehicle. As a result of his performances he was the top candidate to replace Kvyat when Red Bull deemed that the Russian’s displays were not good enough to keep him with the senior team.

Starts don’t come much better than Verstappen’s at Red Bull as he capitalised on a crash between Hamilton and Rosberg to clinch the first victory of his career and his team’s first of the season. Two fine drives at the Austrian and British Grand Prix saw him place narrowly behind Hamilton, although it was still a major achievement for the Dutchman, displaying a high level of consistency at the tender age of 18.

Verstappen has built off his success during the season, learning vital lessons about his behaviour on the circuit after he was criticised heavily by Kimi Raikkonen for colliding with the Finn’s Ferrari at the Belgian Grand Prix. Since the collision the youngster has been flawless and has placed in the top five in four out of his last five races, and although he recorded better finishes in Malaysia and Japan, his performance in Brazil may have been the best of his career.

In terribly wet conditions the Dutchman kept his car on the track where others failed, even managing to turn his vehicle around after a skid almost knocked him out of the race. He made two excellent overtaking moves on Raikkonen and Rosberg, which should have seen him finish in second, although his team required him to pit for a late tyre change.

That knocked him back into 16th place, but he then surged through the pack, with excellent skill in the wet to ensure that he finished on the podium, while sending the message out that he is the future of the sport.